Ants in her pants

2 Comments Posted by onesweetiepea on 19 April 2011

Atilla seemed restless at bedtime this evening.  She has been going to bed later than the others.  The problem with this is that her preferred bedtime position is more likely to already be taken by a toyboy or her sister. 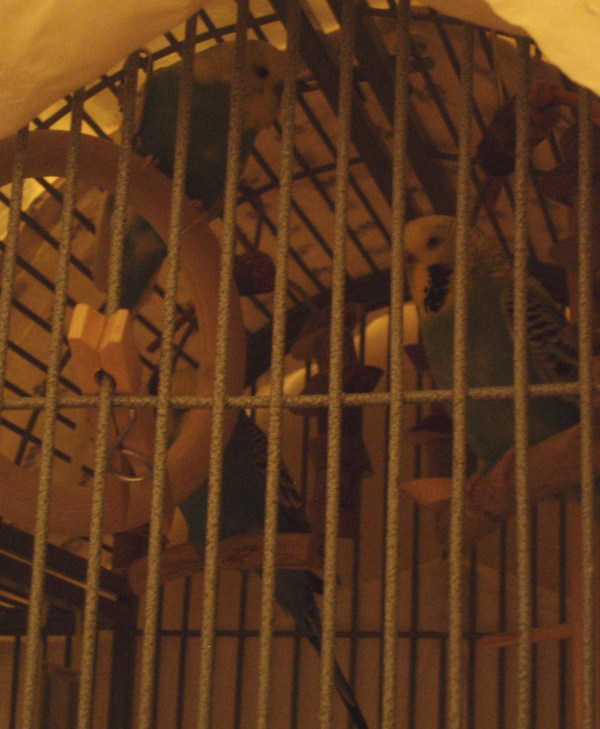 Tonight, the positions already taken were: Bezukhov on the back swing, Raspy on the front swing & Cagney on top of the round swing.  This left Atilla with either the swinging perch or the round swing.  I think that because she was left with the dregs, she was reluctant to get to bed….

When she decided it was time, she stepped up on my finger (from the ttmss swing) but turned her cere up at the round swing.  She then proceeded to shuffle about in the palm of my hand (almost like she was preparing a nest), then had a major flap, clinging onto my finger tightly whilst she got the blood flowing around her wings!  This of course unsettled the others, & both Cagney & Bezukhov immediately left their swings to investigate.  However, Bezuky very quickly returned to his swing, probably because he thought it was a sneaky ruse of Atilla to get him off it so she could take it!

After all of that, Atilla returned to the ttmss swing & the others nodded off again….

A short time later, she decided it was time to go to bed again.  This time she wandered over to the perch below left of Raspy & started faffing about there, vigorously preening, chewing the perch, chewing the cover through the bars & pushing & pulling the green mirror…. She then made her way to the peg & settled there for a little while.  At last peek, she had (reluctantly) got on the round swing…..

Atilla, bedtime, politics, swings birds, budgerigars, budgies, pets
← Worshipping dill How to tell the difference between a pudding & a toyboy →

2 responses to “Ants in her pants”