3 Comments Posted by onesweetiepea on 28 November 2011

It was 2 weeks ago today that Raspy laid her very first & most unexpected egg.  Sadly, we had no idea this was the beginning of the end.

Five days later, I found her straining to lay her second egg.  After a vet visit & a worrying weekend it seemed the egg was absorbed.  By the Monday (21st) she was definitely back to herself again, as can be seen by these blurry webcam videos: Part 1 (EDIT: video no longer available) & Part 2. You will see she was happy in the Ferplast with her boyfriend Bezukhov, jumping about, having a little hanky-panky & going in & out the nest box like a jack-in-the-box.

However, when I got home that evening, I found her straining to lay another egg again.  Things did not look good.  I could see a red bulge, coming & going as she was straining. I rang the vet but Mr Exotic Vet was on holiday.  I was told to contact a vet at another branch who deals with budgies.  I rang them & was told she would ring back.  Whilst waiting, I rang Mr Avian Vet but his assistant told me he was on holiday.  I described Raspy’s predicament to her & she gave me as much information as she could.

I checked on Raspy all through the night.  She just sat in the same place on the perch (she would normally sleep on the swing).  Bezukhov was in the Ferplast with her & slept on the swing.  As it got light, she got restless again.  She now had a permanent big red bulge, with some blood.  I managed to speak to Ms Budgie Vet & she said “Bring her in immediately“.

Raspy back from vet & Bezukhov visiting

It took moments to get Raspy into the travel cage.  She really was not able to resist or kick up a fuss at all (a very bad sign).  Ms Budgie Vet said she had a prolapse & needed to be operated on as soon as possible.  Quite literally, as soon as I signed the consent form, Raspy was whisked away from me.  I was told to go home for a few hours & they would ring me when the operation was over, around 12:30-1pm.

Of course, I could not go home, even though it was just a 20 minute drive away.  I stayed in the car in the car park & then went for a walk around the back streets.  I got back to the car again & waited for the phone call which came at 12:30.

Raspy was okay!  The operation went well, the egg was removed & the prolapse tucked in again & more importantly, Raspy had come to & was already back on her perch again.  Gosh…. such RELIEF!

They asked me to pick her up at 5pm when Ms Budgie Vet would be able to speak to me.  At that point, I did go home, & found Bezukhov shouting for his girl.  Where was she?  I told him she would be back that evening, but he did not listen to me & carried on shouting.

Raspy settled into the Ferplast with Bezukhov

It was so good to see Raspy sat on her perch.  She looked worn out, which was not surprising given the serious operation she had just gone through.  I was given all the medication (antibiotics & painkillers) & told that the next 48 hours would be critical – worst case scenario would be that she would try to lay another egg whilst she still had the stitch in & her insides had not fully healed.

As soon as I got her home I popped her in the Ferplast for some rest & recuperation.  Bezukhov was in & out, giving her comforting kisses.  I covered her over & put the radiator up so she was warm & desperately hoped she would feel better the next day…

Egg that was removed – it was unbroken 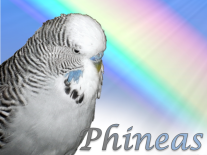