15 Comments Posted by onesweetiepea on 22 October 2014

How to avoid taking your medicine

They say that ‘prevention iz better dan kure’.  For this post, I translate that saying into, ‘freedom iz better dan kapture’.  The single most important thing you kan do to avoid taking your medicine iz to ‘Stay Free And Avoid Kapture‘.  Once I am free of the Manor and able to go where I please in the rest of the world ¹, then it’z all bets off…. No medication today!

If you have fallen at this first hurdle and have been kaptured, there are still other ways to avoid taking your medicine.  My main method kan be summarised thus: ‘Wriggle, wriggle, wriggle… wriggle like the wriggliest wriggly worm would wriggle‘.  In essence, to keep moving means your beak iz never in the same place for longer dan a millisecond, thus avoiding the medicine-loaded firing implement ².  A kunning plan, doncha fink?

Sometimes, the human in question, will attempt to use a kloth of some sort to kontain you.  This kan be a challenge.  I find this next method quite effective, ‘Rotation‘.  It’z a subset of wriggling really, but deserves its own mention.  Wriggling in a rotating way means that when the human adjusts the kloth to find your head, it’z often facing away from the human, thereby making administering of medication impossible (unless the human is a kontortionist which my one izn’t).  The human will then have to temporarily put the medicine launching device ² down in order to use both hands to adjust the kloth to get you in the korrect position but this iz another opportunity to wriggle.

Sometimes, in times of desperation, you have to work with the existing materials.  If wrapped in a kloth, you kan use that as leverage to escape the human’s grasp.  I call this the ‘Climb Upwards‘ method.   If wrapped in a human hand, you kan also use the fingers to gain leverage to climb upwards.  Even if this iz not completely successful, your human will probably have to temporarily put down the medicine propelling cylinder ² in order to use both hands to properly kontain you again.

Another novel way to avoid taking your medicine, iz to ‘Roll Into A Ball‘.   Occasionally it iz difficult climbing out of a kloth straitjacket.  Surprise your human by burrowing downwards.  In doing this, the bottom escape exit may well be blocked but this just makes it easier to roll into a ball where your beak iz protected by the rest of your body.  Your human will once again have to temporarily put the medicine hurling gadget ² down in order to use both hands to reposition you again.

The single most effective way to avoid taking your medicine iz the method I call ‘Beak Clamp‘.  This iz a battle of wills.  Who will crack first?  Hopefully it iz the human and not you.  The medicine machine gun ² is poised by your beak, the only thing stopping it being administered iz that your beak iz clamped shut.  Eyeball your human.  Psyche him or her out.  Just to really worry the human, whilst doing this, stop wriggling.  The human will worry that you are still and most probably, in a moment of weakness, will remove the administering device ².  You can then start wriggling again, vigorously, with beak still clamped shut.

Last but not least, you may wish to deploy the ‘Shake It Out‘ method.  If the human has been dastardly enough to get some medication into your beak, you kan hold it there for a millisecond, then give your head a good shake whilst opening your beak, and disperse the medicine as far as you kan.  If you are supremely lucky, your mama, at this moment, will have her soft beak open herself and will, ironically, take some of her own medicine. 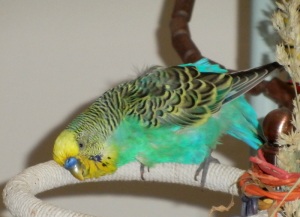 Over and out. x

[1] Rest of the world can be interchanged with ‘lounge’, onesweetiepea (ed)

15 responses to “Guest Post: How to avoid taking your medicine”