8 Comments Posted by onesweetiepea on 23 December 2014

Cagney has hurt his foot again.

Yesterday I noticed that he was holding his right foot up.  He was limping too.  This has happened before & I think it is because his long toenails get caught in something.  I continued to observe him & was concerned enough to remove the swing from the Manor & put some padding on the bottom in case he should fall.

He seemed fine in himself & was getting about.  He even sat in Phinny’s cage for a little while but as the day progressed he seemed to get a little worse.  He had difficulty turning on the perch & could not be bothered to go all the way down to his seed pot.  Naturally, I held the seed pot up to him.  I decided that a vet visit was in order, if only to confirm it was a simple sprain & nothing sinister.

He was most displeased to find himself in the travel cage.  In fact, he put on a great display of “There’s nothing wrong with me, Mama!  Why have you put me in here?!”  I took him to see Ms Exotic Hospital Vet (EHV) anyway!

Ms EHV examined him & said that he definitely had bruising in two places on his right foot.  Nothing was broken & nerve endings appeared fine.  She said he just needed to rest it.  (How do you tell a budgie to rest his foot?!)  She gave him an anti-inflammatory injection that would last for the rest of the day.  She also gave me 4 days worth of oral painkiller (Metacam) to give twice a day.  It would help even if he only had this once a day so I will attempt to give him some!  (I just hope he has not read Bezukhov’s post ‘How to avoid taking your medicine‘).

Whilst Ms EHV was examining Cagney, she cut his toenails.  Unfortunately, she cut one too short & it started bleeding.  She managed to staunch the flow quickly but not before there were a few drops of blood spattered about.  She wanted to weigh him too, so wrapped him in a cloth & put him on the scales.  He weighed a healthy 46 grams.

Whilst he was wriggling in the cloth, the remaining blood had managed to smear across his feathers.  She tried to clean him up a little but he still looked a bit worse for wear at the end, albeit with nice short toenails.

We returned home as quickly as we could.  Bezukhov was upset at being parted from his buddy & Phineas was on the verge of spontaneously combusting because I had not had time to give him his morning constitutional & on top of that, he was confused as his beloved Cagney had been moved to the travel cage.  Cagney’s return was greeted with lots of shouting.  Cagney was probably a little tired from his ordeal & was quite calm in the travel cage so I thought I would leave him to rest in there for a little while.

My plan was to swap the Manor with the much-smaller-but-more-manageable-for-a-dodgy-foot folding cage.  This would also give me an opportunity to give the Manor a much needed deep clean.

Just to be sure, I grabbed Cagney in the travel cage & deposited him directly into the folding cage.  He did not seem too put out.  Now to give my attention to Phineas & Bezukhov.  Bezukhov was quite comfortable on the play gym.  Phineas was quietly… actually, not quietly…. noisily doing his pieces.  I gave him my finger to regurgitate to & he immediately unburdened all his frustration on it.

Although Bezukhov, by now, wanted to be with Cagney, he did NOT want to go into the folding cage.  What followed was at least 2 hours of me chasing Bezukhov around the room!  Sometimes he was on my finger & I got him just by the open door of the cage but he just could not go through that small opening!  He showed no signs of slowing down but I was so I called a temporary truce of 1 hour.  He snoozed on the play gym & I rested my feet!

When the hour was up, battle commenced, again.  Finally, I managed to encourage Bezukhov to climb on the side of Phinny’s cage & grabbed him!  Success!!  I swiftly bundled him into the folding cage.

Bezukhov refusing to go into the folding cage

All was well again.  Sort of.  They both seemed relatively relaxed in their new surroundings but completely ignored the 3 lots of seed (fountain containers, dishes on floor, pots hooked on side) I had arranged around the cage.  As it got later, I gave in & held up a seed pot to them & they both ate.

Okay, so they just need some time to adjust…

Come bedtime though, when I put the cover half over them, they both panicked.  I think they thought ‘temporary’ meant an hour or two & NOT overnight!  Oh dear, they were not amused.  Their bedtime antics have made me rethink my plans; I may reinstate the Manor much quicker than I originally thought!

Lights off now though & Cagney & Bezukhov seem to have settled.  Phineas too.  What will tomorrow bring?!

Cagney & Bezukhov in the folding cage 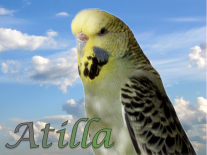