It was Easter last week.  A Bank Holiday weekend.  Cagney was ill.

He appeared okay during the Sunday morning.  They are all moulting now so a bit of grumpiness & sleepiness was to be expected.  However, during the day I began to have more & more concerns about Cagney’s behaviour.

At 11pm that night, I rang the vets on the off chance they would have a vet on call with an interest in birds.  They did not.  However, Ms Exotic Hospital Vet (EHV) was working the next day, Bank Holiday Monday!  What a stroke of luck!  (I will not mention the Bank Holiday rates!)

So, Cagney visited Ms EHV the very next morning.  He was much the same, with loss of appetite, pale feet & twitching wings, though he decided not to twitch his wings in front of Ms EHV, but I had evidence on film.  She gave him a thorough examination, including taking his temperature in a very undignified place which made him squeak.  She could see his paleness, in his feet & also inside his beak, but apart from those things, could not see any other clinical signs of illness.
An x-ray & blood tests were an option, however, we decided to give him an injection of multivitamins & Calcium Gluconate.  She weighed him in order to get the correct dosage & he was a healthy 45 grams.
Her expectation was that there would be signs of improvement within a few hours.
The first sign of change was orange poops from the injection.  When I got him home he was quiet for a little while so I kept him in the travel cage.  I let him out when he started to move about a bit.  I made the executive decision to not let Phineas out the same time as Cagney as he can be a bit boisterous.
–
For the rest of the day, Cagney seemed much like before.  He still appeared reluctant to eat so I kept offering him food (seed, cucumber, apple, millet) in the hope he would be inspired to eat.
The following day (Tuesday) I spoke to Ms EHV on the phone.  Though he was not better, he was not worse, so we agreed to give him until the next morning before intervening.  Fortunately, during the day, there were very small signs of improvement.  He had a brief fly & ate a little millet & some pellets.  The next morning he seemed stronger & was interacting with Bezukhov & Phineas more.

That night, a very strange thing happened: Bezukhov preened Cagney.  I do not recall this happening before.  They were both in the loft area, ready for bed, when Bezukhov just leaned over to preen Cagney’s head.  He did this long enough for me to get my camera & take some murky photos as evidence that I was not dreaming.

By the Thursday, Cagney was definitely recovering.  The wing twitching had stopped & he was eating more.  I can only assume he was run down from his moult.  I continue to keep an eye on him.

6 thoughts on “It had to be a Bank Holiday weekend” 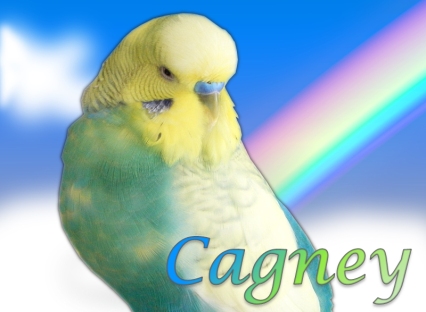