Remembering my girls: Week One

3 Comments Posted by onesweetiepea on 29 March 2016

When I first brought my girls home, I kept a diary for just over 3 weeks of my attempts to tame them. I thought I would reproduce it on this blog.

At the time, I had not decided on their names but for the purposes of these posts I will refer to them as Atilla & Raspy. 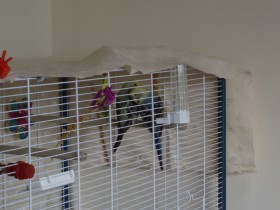 I got my two girls from a breeder. He had about 50 budgies in an outside aviary. My girls were in a separate cage in the aviary. The breeder got them out & showed me how to hold them. Atilla drew blood!  They pooped on my hand & on my boot.

He pointed out their parents & I recall being stunned by the bright colour of one of them & he said that Raspy would turn that colour. I confess that I did not take too much notice of that comment, thinking I was probably looking at the wrong bird as I could not believe one of mine could change colour like that.

On the drive home, my girls sat quietly on the back seat (in their travel cage!), with the occasional “tweet”. On arriving home, there were a few “cheeps” when moving them off the back seat. Once in their big cage, they were quiet & hardly moved.

They are eating the millet when I put it in front of them but they will not go & eat it.  I have not seen them drink any water which worries me.  They also ran away from the seed when I offered it to them which also worries me!!!  They have investigated the green carrot tops when I put that up to them. They probably just want the nasty red nosed face woman to go away! (I had a cold!)  They do not like it when I cough, either… 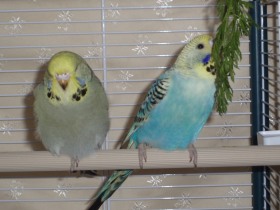 They sometimes chirp in response to the youtube video of birds. I need to find one longer than 3 mins. They were very lively at the breeders so I know they are capable of being lively.

They are very together & I have even seen them preen each other’s heads.  Atilla is definitely a girl.  The breeder reckons Raspy (the blue one) is a boy but I am not convinced.

They have the lovely big cage which they haven’t explored yet!

Hallelujah! They have flown from perch to perch, about 4 times! PLUS, Raspy has investigated the water pot & I am sure I saw ‘him’ take a sip!

The millet is going down well but it is only supposed to be used as a treat as too much can make them fat, but I guess they need a treat right now.  They ate one bit so much it fell off the clip.  They looked at it on the floor but decided to leave it there & investigate the other bit by the other perch. So, it means they are using their brains a little!

They seem quite confident with the top section of the cage but have not explored the bottom part (where the in-built seed pots are).  The millet was razored to the bone yesterday.  I will put some more in today, but clip it to the bottom near the seed pots. They have a separate open seed pot at the top which they have been eating out of.

Atilla drank water twice this morning which is a relief.  Raspy spent half an hour chirping loudly non-stop. They have investigated the mirror, twirled the perch toy thingy & thumped the hanging ball/bell thing.

Atilla does this strange thing where she rubs her head along the perch & tries to rub it under Raspy’s foot.  One time Raspy was completely unbalanced by this & fell off!

Sadly the fall to the bottom of the cage did not bring on a let’s-explore-down-here-oh-there’s-a-big-pot-of-Trill-just-there, rather a oh-dear-where-am-I-best-get-back-up-to-safe-perch-quick!

They seem to like Laurel & Hardy’s “Honolulu Baby“.  On the TV, they are suspicious of the end-of-round jingle in Weakest Link & are not keen on the BBC News intro music. No adverse reaction to Eastenders or Corrie theme tunes so that is positive…..

I changed the perches around, to encourage them to go to the bottom of the cage but they were having none of it & were confined to one side of the top all afternoon, avoiding the “nasty” perch over there…. Even though the nasty perch had millet & green carrot tops by it.

Finally, Atilla jumped over to get some water (obviously forgetting the perch was “nasty”), and what a surprise – the perch bounces! It is like the millennium wibbly-wobbly bridge! (It is only attached to one side of the cage, hence wobble). I thought, this will freak them out, but they loved it! I guess it mimics what it would be like in the wild, landing on a tree branch. They were running up & down it with great excitement. The adrenaline must have been soaring because Atilla then jumped down to the mid-level perch. So, a bit of sneaky tactics & I got them to mid-cage level!

After work on Thursday, I held my hand in the cage (& arm – it’s quite a big cage!) holding a spray of millet close to them.  Raspy tucked into the millet & gradually I moved my hand away.  She kept nibbling my hand (sign they are checking it is a solid surface etc.)  She refused to budge & was almost horizontal, stretching out, with two feet firmly wrapped around the perch.

On Friday, I did the same thing but this time Raspy plucked up courage & jumped on my hand but obviously decided it felt a bit strange & was off a split second later.

Saturday I did the same again. This time, Atilla was on the mid-level perch & was chewing at my sleeve, then climbed onto my sleeve, nibbled at my arm & attempted to climb up my arm to my hand, holding the millet. Unfortunately, Atilla slipped & flew off. (Mental note to self: pull sleeve up to wrist).

Later on, Atilla tucked into the millet. When moving it further away, Atilla cautiously put one foot on my hand (other firmly attached to perch) & after a few moments had 2 feet on my hand, tucking into the millet & was then climbing all over my hand looking for a better position! All the while, Raspy watched.

3 responses to “Remembering my girls: Week One” 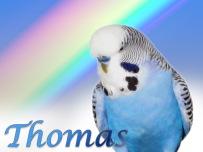