3 Comments Posted by onesweetiepea on 31 March 2016

The diary for the second week is posted here: Week Two.

I put the bath there with lots of spinach leaves in. They saw it but did not go in. When I moved the ladder around, Raspy jumped on my hand, had a nibble then got on the other perch, using my hand as a go-between.  Atilla then jumped on, had a nibble then fluffed up & fell asleep!

I gave them some fig which was appreciated.

I put the ladder horizontally across.  It is funny watching them walk across it as they have not quite worked out where the rungs are & keep knocking their chins. Raspy also discovered you can go down through one hole & up through another.

I gave them spinach in the evening.  I noticed Atilla was holding her foot up to hold it but it was too high. I put my hand in to give leverage.  Atilla jumped on & had a nibble of the spinach that was now within easy reach.  Raspy also jumped on my hand. I held them up to spinach which they carried on eating even though the perch was just below them. 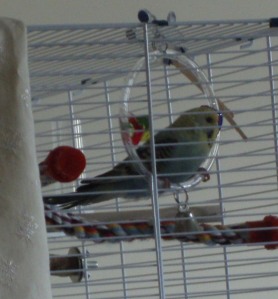 Raspy on the swing

I left some spinach & carrot for them whilst I was at work.  They were eating seed from the in-built seed pot at the bottom.  Carrot was licked clean by my return.

Also, on my return, I found Atilla quietly sitting on the swing!  After a few minutes she got off & Raspy got on! It was very amusing to watch.

They sat by the empty carrot pot, looking at me as if to say, well fill it up again, then!

They got on my hand to chew green carrot tops.  Later on, when I put spinach in, I put my hand in to help Atilla up to the top to eat it.  They both climbed on my hand, even without a treat.  Raspy would jump on & I would move my hand to the other perch & she would get off.  My hand was like a transport system.

That evening, I took the open seed pot out & they both sat & ate out of the 2 in-built, covered seed pots!!!

I left some spinach & carrot for them whilst I was at work. I put the open seed pot back in so I could be sure they were eating whilst I was not there.

I left some spinach & carrot for them whilst I was at work. That evening they played on my hand/arm twice.  The first time was with the new plug toy (plastic cover that comes with a new plug) which caused great excitement.  Atilla sometimes goes a bit mad, shakes her head & bottom & does a little dance up & down my arm (usually backwards).

Raspy comes up to the front of cage to nibble my nose.

I left some spinach & cucumber for them – they did not eat all the cucumber. That evening they played on my hand/arm 3 times. They investigated the cat ball on my hand.  Atilla jumped on immediately.  Afterwards I hung the cat ball from a wooden stick & they found that to play with.  I also put in the homemade plug toy which they played with again. They scrambled over my hand when I helped them eat the spinach later on.

Atilla came up to the side of the cage & nibbled my glasses. 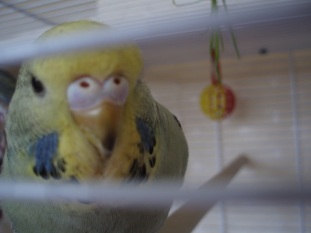 I left some spinach for them whilst I was at work.

Yes, a rather abrupt ending to the diary!  So, there you have it – the first weeks spent with my girls.  Very early on there were signs of them dominating me & of course it did not take long until I was completely under their claws…  (& enjoying every second of it!)