After 25 days of quarantine & getting to know Bezukhov & Phineas through the cage bars, Dalai finally came out of his cage! 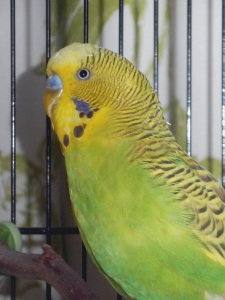 The day after Phineas introduced himself to Dalai, I started leaving his door open.  It was about a couple of days later that I sensed he was interested in coming out.  A week later & he still had not come out.  Over the days I gradually tweaked the arrangement of the open door by adjusting the height & the perches around it (inside & out).  It was possible that he had trouble with small door openings (I know some birds do).  We really needed either Phineas or Bezukhov to sit directly outside the open door to encourage him which was why I kept adjusting the outside perch.  I also pegged curly  paper in the doorway to entice him out.

About 11 days after leaving Dalai’s door open, Phineas invited himself in!  My heart was in my mouth watching this close encounter.  I would have preferred that a calmer & more sensitive Bezukhov had taken that step instead of an excitable Phineas but this way, there was the option that Dalai would vacate the cage just to get away from Phineas!

Fortunately, despite Phinny’s behaviour bordering on harassment, Dalai seemed to hold his own, even with being (it seems) half the size of his friend.  At one point, there was a ‘beak bash’ going on & a misjudgment on Phinny’s part almost knocked Dalai from the perch.  Dalai also looked a bit put out when Phinny touched his swing.  It was compelling viewing!

On the positive side, once Phinny found his way into Dalai’s cage, he was then in & out like a weather man!  Dalai would surely follow him at some point?

END_OF_DOCUMENT_TOKEN_TO_BE_REPLACED

A sure way to get Dalai to sample something new is to let him see Bezukhov or Phineas eating it right in front of him, or in reality, right above him.  This technique worked with the wild grass which I laid across the top of his cage.

A salt lick had been languishing at the bottom of his cage since he arrived.  Dalai showed no interest.  However, when I placed it on top of his cage, where Bezukhov & Phineas could lick it, his curiosity was ignited.  It did not take long for him to crawl across, upside-down, to investigate.  Once he licked it, he was hooked.  We have another fan of the salt lick.

Bezukhov, Phineas & Dalai with the salt:

As previously posted, (click here) we have been gifted with lots of fresh, seeded wild grass.  Bezukhov & Phineas have been tucking in, as can be seen from these photos: 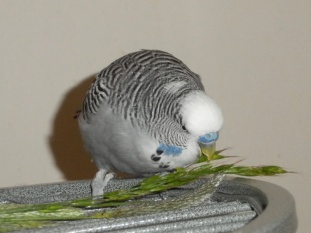 When I presented a stalk of grass to Dalai, he was scared of it.  Clearly he had no idea what it was.  To get over this, I laid some across the top of his cage for Bezukhov & Phineas to eat, in the hope that Dalai would see it was a good thing.  It did not take long for him to investigate & he tried some, upside down!  Once I saw that he had tasted it, I pegged some up inside his cage so he could eat it the right way up! 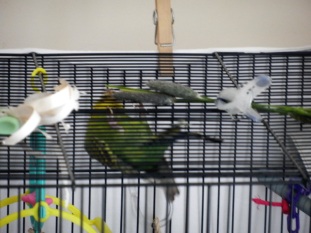 Follower rosebudgie & her sharing sausages have been busy parcelling up goodies.

The postman has been busy delivering goodies.

Bezukhov, Phineas & Dalai have been busy eating the goodies that have been sent:

Grass for the three musketeers (4)

Thank you, rosebudgie & the Sharing Sausages!!!

Dalai tried to have a bath in his water pot.  He only really succeeded in bathing in air.  Nevertheless, I was impressed with his attempt.

Phineas introduces himself to Dalai

Though Bezukhov would visit Dalai, the novelty seemed to wear off after a few days.  Nevertheless, Dalai seemed much happier to be around his own kind & would busy himself in his cage & if Bezukhov visited he would go over & have a chat with him.

The only time Dalai appeared troubled was after 8pm in the evening when he would have a brief restless phase.  I sensed that at bedtime he wanted to be either with the others or closer to them.

Around two weeks later, when I thought it was time to encourage Dalai to come out of the cage, I decided to move his cage where the play gym was, beside the Silver Villa.  This way, when he finally came out, he would not have as far to go to be near the others.

His close proximity finally piqued Phinny’s interest & he introduced himself!

Surprisingly, though Dalai presented his toes through the bars, Phineas was not tempted to bite them.  This was surely a good sign!

Then Bezukhov joined him:

2 Comments Posted by onesweetiepea on 8 May 2016

When Dalai came to us, he brought his own seed in case he did not like ours.

His seed looks different to ours; the over all colouring looks more yellow, though we can see lots of similar seeds.  Over time, I have gradually added more of our seed to his non-specific seed mix, so that by the time we have run out of non-specific seed, he will be happy to eat our seed. 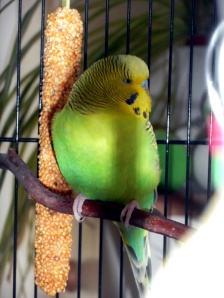 Although it is normal for seed mixes to have some shell in them, I was surprised to see these tiny, perfectly proportioned shells in the non-specific seed mix:

Bezukhov introduces himself to Dalai

2 Comments Posted by onesweetiepea on 7 May 2016

The next task was for Dalai to get to know Bezukhov & Phineas through the cage bars.

To help this process along, I positioned a perch on the outside of Dalai’s cage, for visitors.  I also tweaked the perch arrangement inside his cage to make it easier for him to come up to the bars & meet his new (hopefully) friends.  Unfortunately, Dalai was unnerved by the changes in his furniture & confined himself to the far corner.  Fortunately, that corner had millet & water.

For two days I watched for Bezukhov & Phineas to make their move, but very little was happening.  The nearest Bezukhov got was to the window perch.  Perhaps Bezukhov needed a little coaxing; he can be shy, plus he is used to being Cagney‘s wingman in such situations.  On one of his visits to the window perch, I encouraged him to get on my finger & I slowly moved him closer to Dalai’s cage.  Bezukhov found some courage & jumped on the perch to check out Dalai!  You can see this early encounter in the video below.  You can also see that he seemed to take comfort that my finger was close by as a safe place to retreat to when he felt unsure.  Dalai’s jump towards him was clearly too much too soon & Bezukhov flew off!

It was the beginning of several visits.

2 Comments Posted by onesweetiepea on 5 May 2016

After Dalai’s 25 days in quarantine, I brought him into the lounge to be with Bezukhov & Phineas (8th April).  I decided to position his cage at the opposite side of the room to them, mostly because there was more room for me to carry on with the taming process.

All parties were shell-shocked.

The silence was eventually broken by some tentative tweeting.  Bezukhov & Phineas seemed almost united in their joint confusion.  Gradually they went about their usual business, which in Phinny’s case included a quick hand jive.

Dalai also began to mooch about his cage & behave as normal.  Here here is, settling into his new location:

Here are a surprised Bezukhov & Phineas:

With Dalai in one corner of the room, Bezukhov in the other corner on the playgym, Phineas in the third corner in the Manor & myself in the final corner working, I noticed we managed to independently cover the whole room.  Three lively but unreciprocated conversations were going on (possibly four if you include me talking to myself!)

6 Comments Posted by onesweetiepea on 1 May 2016

Three years ago I posted on the joys of curly paper (click here).   The latest recruit is Dalai.  He loves curly paper!

He quickly makes short work of what I peg up for him.  The floor underneath him is littered with chewed up bits.  I thought that curly paper may be the thing that helps with taming.  (I say ‘taming’ but I really mean getting Dalai to not be scared of my hand.)

As soon as my hand goes into the cage, Dalai usually retreats to behind a mirror, whether it is his red mirror or the mirror on the swing.  Food did not seem to entice him out.  Curly paper has.  I hold up a strip & let it wave & wobble & gradually his curiosity gets the better of him & he stretches out to chew it.  As he tears off the paper, he has to get nearer my fingers.  After a few days of doing this, he got to within about 3 inches of my fingers which was a breakthrough, given that he would usually hide.  With a little more patience, he tentatively touched the tip of my finger with his beak!

We are now at the stage where he nibbles the tips of my two fingers that are holding what is left of the curly paper.  He still does this from the safety of the swing.

I want him to associate nice things with my hand/fingers.  I did not think that curly paper would be my ally in this task!