3 Comments Posted by onesweetiepea on 7 March 2017

At long last, Perry & Lennie were out of their quarantine cage (see previous post)!  I say ‘at long last’ but of course from when their little door was opened, it only took them a few days to venture out, unlike Dalai & Thomas who took weeks to pluck up the courage to go through the open door.

Perry & Lennie had no trouble with flying.  It is always gratifying to see a budgie, who has been confined, able to stretch their wings & have a good fly & zoom around the room.  The blue newbies typically found the highest points to land, such as the curtain rail & the string lights across the window.  They also landed on the manor – the first encounter between all four of them without bars between them.  It was a bit tense to say the least.

A worn out Lennie on top of the manor

Perry on the wooden swing in the manor & Lennie looking on

Dalai was clearly uncomfortable & lunged at Perry when he got too close.  Bezukhov ran away from Perry.  To settle my nerves, I locked Bezukhov & Dalai in the manor as soon as I could.  This way, Perry & Lennie could concentrate on getting to know their wider surroundings without causing upset.

Lennie seemed the more shell-shocked of the two, with Perry being the more confident.  Here they are, on the manor, where Bezukhov & Dalai are captive:

Exploring the boing & the string lights across the window:

They found the top of the Silver Villa:

About an hour after Perry & Lennie came out, it appeared that Bezukhov wanted to come out.  He had a quick fly but was chased by the blue newbies.  Alarmingly, Lennie did a brief jealousy wing-flap.  Lennie also managed to land beautifully beside Bezukhov on the window perch (I was impressed with that!)  After a short time, I managed to lock Bezukhov back in the manor with Dalai who clearly wanted nothing to do with any of the nonsense!  I had put a cover over the top of the manor to avoid any chomping of dangling toes through the bars.

Around half an hour later, both Bezukhov & Dalai wanted to come out the manor.  Unfortunately, Perry got too close to Dalai & was punished by Dalai hitting him & actually grabbing some head feathers.  I was not happy with this, so took the first opportunity to lock Bezukhov & Dalai back in the manor again!

So, two hours after Perry & Lennie made their surprisingly confident first fly I managed to encourage them to go home (millet played a part).  Peace was restored.  For the time being…

Perry on the string lights

Lennie’s brief landing on the playgym

Blue newbies finding their way around 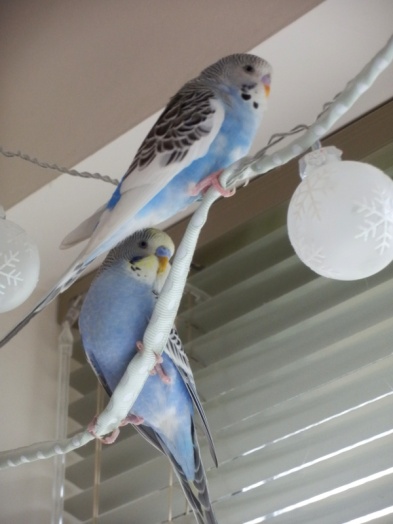 On the string lights