Remembering Dalai on his adoption day

On this day, 5 years ago, Dalai came into our home.  He was a marvellous member of the flock, very clear with setting his boundaries yet getting along with all the diverse characters.

He also loved a bath:

Always in our thoughts & still missed.

Remembering Dalai: One year on

2 Comments Posted by onesweetiepea on 26 February 2021

On this day last year, our friend Dalai made his way to rainbow bridge.

It is hard to believe a whole year has gone by without him.  There was a survival instinct about him that suggested to me that he would reach old age.  Sadly, this was not the case.  Each loss is hard & each loss is different.  Losing Dalai, who seemed so robust in health & character, hit me hard. 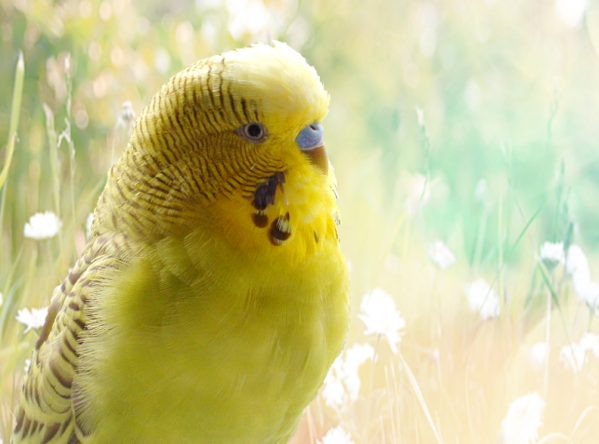 Always in our thoughts & still missed.

3 Comments Posted by onesweetiepea on 3 October 2020

I am pleased to report that Perry, Lennie & our dearly departed Dalai, feature on the autumn-themed banner of a budgerigars forum!

There is a competition each season to select a new banner, with the winner voted for by the members.  The following is the winner:

You can see it has a Shakespearean, three witches theme, with, appropriately, three budgies looking like they are cooking up some trouble.

The banner can be seen in situ here: http://budgerigarsforum.proboards.com/ over autumn.  Do take a look & have a browse around the friendly & informative forum. 🙂

3 Comments Posted by onesweetiepea on 30 July 2020

Perry & Lennie often pop into Dalai’s cage for a change of scenery.

Lennie is the more frequent visitor & will be in & out, but Perry also visits & spends some time ‘chilling’.  Initially, they were wary of moving around the cage, almost like they were uncomfortable that Dalai was not there, but over time they have become more relaxed.

That said, neither have dared to sit on Dalai’s perch at the back on the far right (a twig-like perch, diagonally across the corner).  Dalai did not allow them to sit on it.  Perry accepted this rule pretty quickly & did not bother to attempt to sit there.  Lennie wanted to sit next to Dalai on that perch, but the nearest he could get was to cling to the cage bars near the perch & if his luck was in, Dalai would go over & chat to him.  If Lennie was feeling particularly bold, he would tentatively climb onto the perch when Dalai was otherwise engaged at the seed trough, but he was on edge & never hung around there for longer than a minute.

(Incidentally, Bezukhov was allowed to sit on this perch, possibly because he lived in the cage before Dalai & it would have seemed churlish not to allow him!)

Even though Dalai is not here, Perry & Lennie still do not sit on Dalai’s perch.

Here is a rare moment when Perry sat on Dalai’s swing: 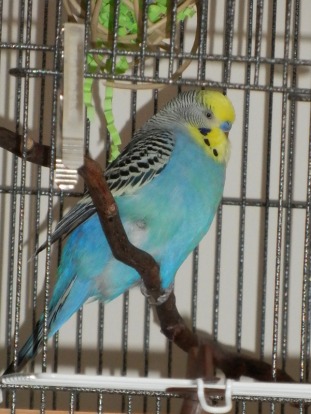 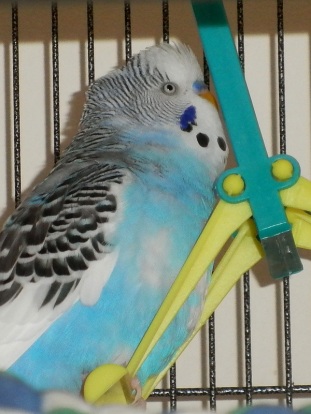 Dalai was cremated & his remains returned the week after his passing.  As with those before him (Raspy, Atilla, Thomas, Cagney, Phineas & Bezukhov) I am making a new home for him in the form of a pillow/cushion.  The inner pillow has been completed.  I chose a yellow colour & added my customary wonky embroidery.  His remains now sit with the others.  He only knew Bezukhov & Phineas here but I like to think he has made friends with Atilla, Raspy, Thomas & Cagney. 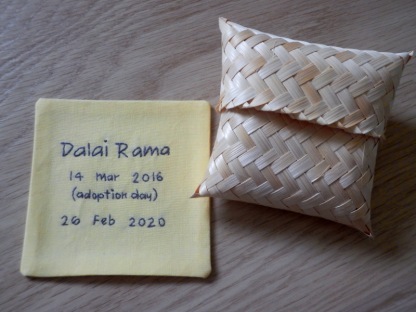 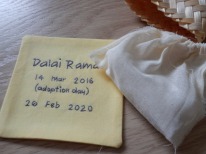 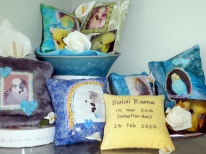 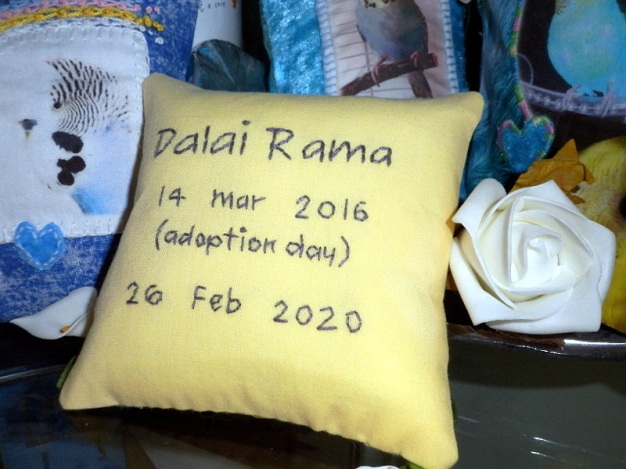 Missing you my little man.

Remembering Dalai on his adoption day

4 Comments Posted by onesweetiepea on 14 March 2020

Dalai came into our home on the 14th March 2016.  He was, we believe, around 5 months old at the time, putting his birthday (or hatchday) at sometime in October 2015.  I never dreamt that he would not be here for the 2020 celebration of his special day.  Despite the sadness, I will take this opportunity to share some photos…

During quarantine, Dalai was self-assured & calm: 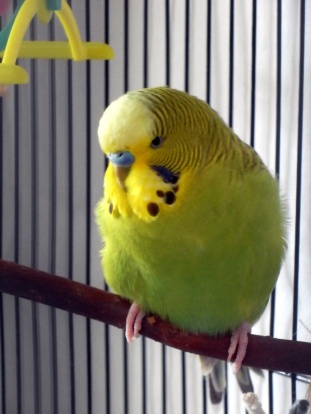 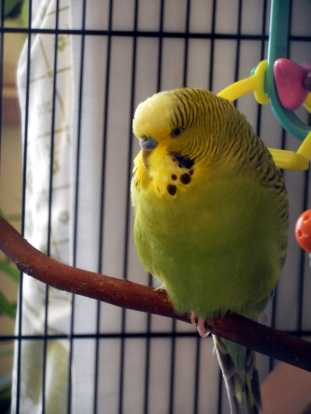 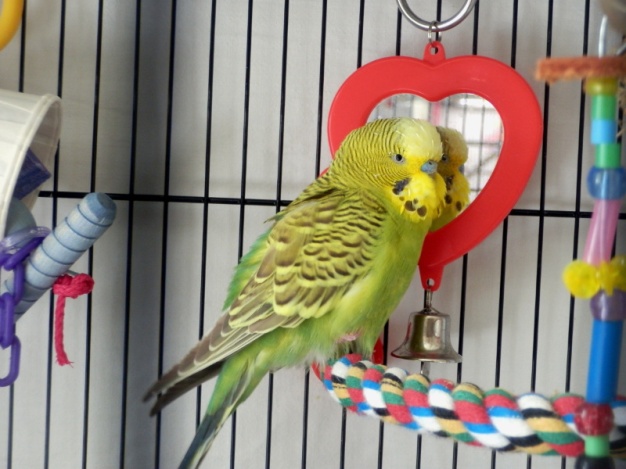 He made good friends with Bezukhov & Phineas: 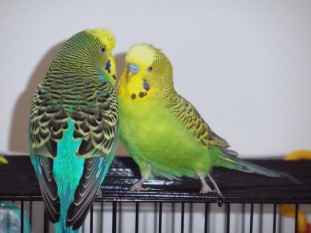 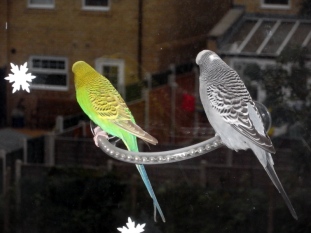 Dalai was not always swayed by flock mentality & if he wanted to do something or be somewhere different to the others, he would go ahead & do it.  This photo shows him, in the early days, not returning to the cage for bed & Bezukhov & Phineas coming out to join him: 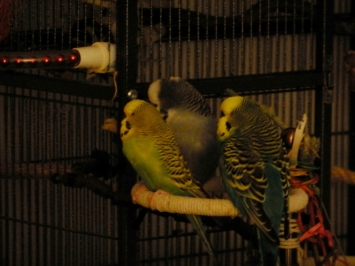 He had more in common with Lennie that I think he would care to admit: 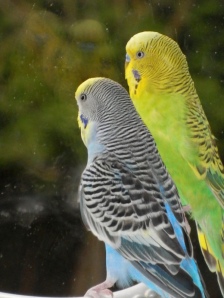 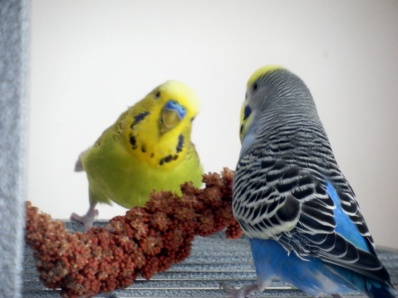 Dalai was not overly giving to others (flirting aside) though was witnessed caring about Bezukhov when he was poorly: 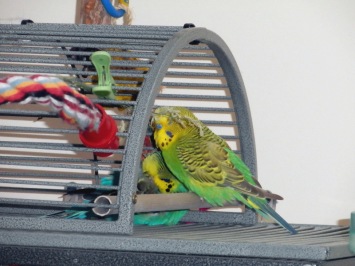 Despite the above, Dalai would openly preen Perry’s head & was doing this even in his last days when he was unwell: 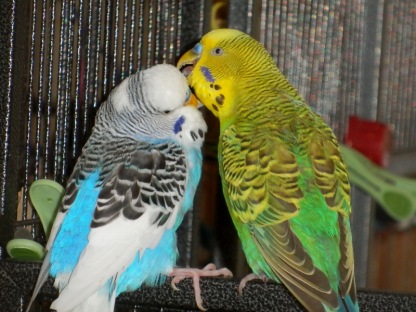 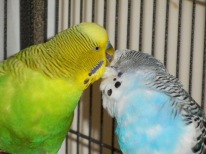 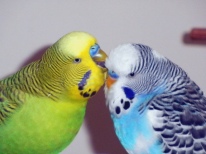 Dalai was a big presence… much admired & much loved. 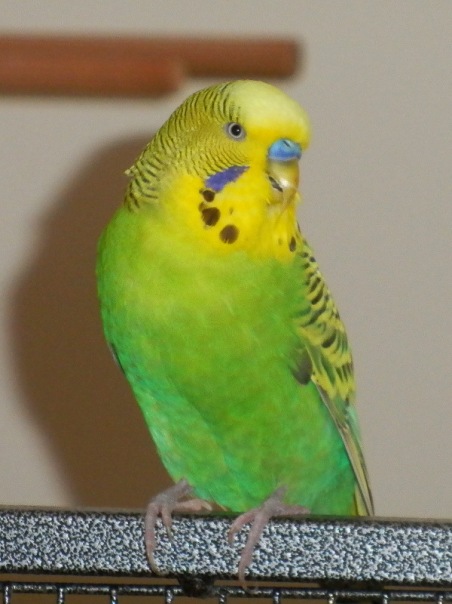 Missing you very much, Dalai darling. 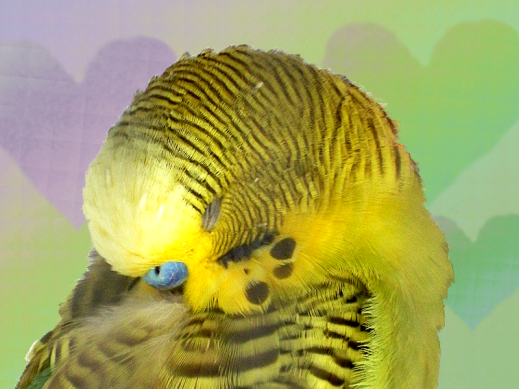 2 Comments Posted by onesweetiepea on 10 March 2020

As previously posted, we lost our dear Dalai on the morning of Wednesday, February 26th. 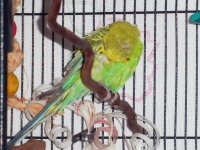 I have mentioned before that Dalai had been moulting.  He had the usual moult in October time & recovered well from that.  His next moult was over Christmas which was unexpected.  This was followed by another one in February, also unexpected.  It is thought these successive moults may have weakened his system in some way.

Each time, he was a bit grumpy but that was normal behaviour for him.  When he seemed particularly fed up (not bothering to come out when I unlocked him in the mornings) I would feed him a bobble of millet or six.

On Friday 21st, I he spent a large part of the day in Perry & Lennie’s cage, returning to his own quite late.  I recall thinking that the expression in his eyes did not look quite right, he looked tired.  The following day he barely ate.  On reflection, he must have reduced his food intake in the week prior, but this was difficult to gauge given they share all the seed pots.  His daytime sleeping was interspersed with manic moments of activity (walking upside down across the ceiling of his cage).  I worried that he would not survive the night & kept checking at intervals. 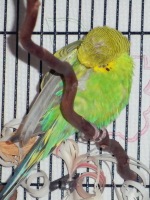 Leading up to this, his poops were fewer, but bigger, but I was not overly concerned as this change had happened during his previous moults so I assumed the change was temporary.

Because it was the weekend, our usual vet was not available so I spent a frantic time trying to find an exotic vet working the weekend.  We ended up going to the Veterinary Hospital on the Sunday to see a vet with an ‘interest in birds’.  I knew Dalai would have lost weight & because, by now, he was not eating at all, I wanted access to a feeding formula.  On Sunday, the hospital has a process similar to A&E triage, which meant Dalai may be in the waiting room for hours.  I said I did not want this as it would be stressful for him.  They would not release any feeding formula to me without a consultation but agreed to let us wait in a private room to reduce stress.  As it happens, we were seen as soon as we arrived.

As expected, Dalai had lost weight & on her scales weighed 35g.  The vet said he was dehydrated & to orally administer Critical Care, dissolved in water, for a few days before considering a feeding formula.  It was an expensive visit for what seemed like little support & care. END_OF_DOCUMENT_TOKEN_TO_BE_REPLACED

11 Comments Posted by onesweetiepea on 27 February 2020

It is with great sadness that I report our dearest Dalai died yesterday, 26th February.  (His full name was Dalai Rama, but I would call him Dalai Darling.)

Dalai, we are devastated you have left us so soon.  Your loss is hard to bear. I choose to believe you are now with Bezukhov & Phineas & your little hen friend, lost before I came along.  You were adored here & you will be adored over at Rainbow Bridge.  Thank you for being such a strong & vibrant boy.

We are missing you already.  Love you always.

3 Comments Posted by onesweetiepea on 20 February 2020

My three feathery companions are all well.  They are moulting again (how is that possible?!)  Dalai has been extra grumpy because of that.  Perry is in good spirits despite his ever-growing lump.  Lennie is coping with his difficulty in flying by eating, but he has not thought that strategy through!

There is no discrimination on “Love Your Pet Day” as I also think of those long gone: our dear Raspy, her sister Atilla, handsome Thomas, incorrigible Phineas, cheeky Cagney & lastly, dear Bezukhov.  Today has been so rainy & Bezukhov loved to watch the rain… 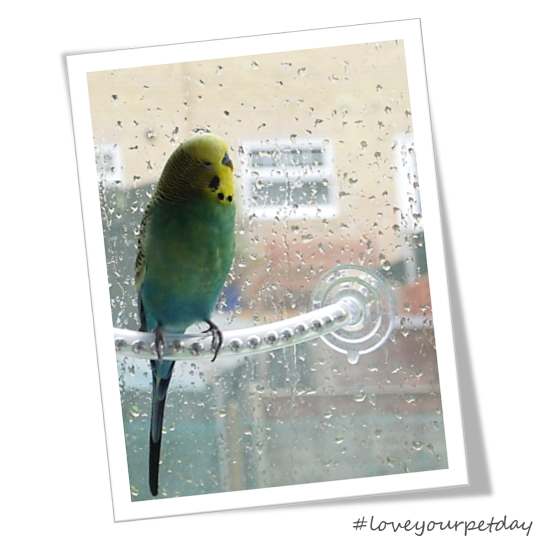 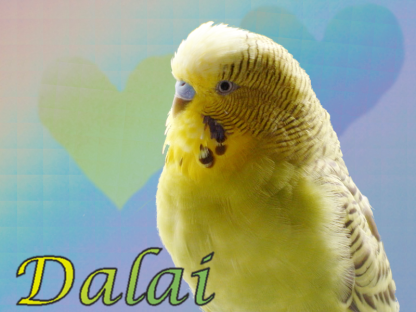 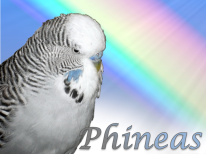