Phineas still adores Cagney.  As soon as Cagney moves, Phineas is there, right in front of him, following behind him or above him on the bars. 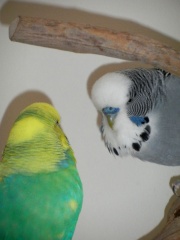 Cagney, did you call?

Cagney does not feel the same way about Phineas.  If truth be told, I believe Cagney gets frustrated at not being about to move without having to push past Phineas.  Sometimes he cannot eat because Phineas is trying to kiss him at the same time.  As nice as it must be to have such attention, it must be wearing to have it all the time!

Phineas tries too hard with Cagney.  He does not know when to stop or to hold back.   Add to this, that he chases Bezukhov away as he wants Cagney all to himself.  This action in itself would not endear him to Cagney as Cagney is very fond of his mate Bezukhov.  It certainly does not endear him to Bezukhov.  There are times when Bezukhov stops Phineas in his tracks to engage him in a conversation.  Phineas seems surprised by this & although he tentatively gives Bezukhov a listening ear, does not appear to respond or further the conversation.

Bezukhov is particularly wary of Phineas as there have been about 3 occasions when he has not run away quick enough & Phineas has grabbed him by the wing or the head (when leaning over the top of the cage).

Probably unsurprisingly, Cagney & Bezukhov have not wanted Phineas to sleep overnight with them.  They make this quite clear.  During the evening, as it comes to bedtime, if Phineas sits in Manor loft area, both Cagney & Bezukhov will vacate it.  END_OF_DOCUMENT_TOKEN_TO_BE_REPLACED