4 Comments Posted by onesweetiepea on 4 October 2014

As reported in my last post, it appeared that Bezukhov’s weight had dropped in the days following his x-ray & blood test. 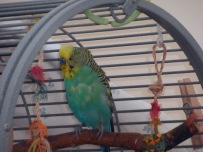 My scales showed that Bezukhov had apparently lost 6g in a few days.  I rang the vet but she had already left for her holiday.  Another vet rang back.  I explained the situation that Bezukhov had lost weight & was too weak to eat to gain more.  I had been offering Bezukhov as many different vegetables as possible to try & entice him to eat.  Cucumber was the vegetable of choice.  That seemed to be all he wanted to eat & though that was better than nothing, it would not be enough to build him up.  The vet prescribed some Emeraid Omnivore which is a critical care formula for feeding to birds.  If that did not help, then once again, hospitalisation may be an option.

Once my budgie-sitter had arrived, I dashed off to the veterinary hospital to pick up the formula.  It is a powder to be mixed with warm water.  If I say so myself, it looks like & smells like a rather appetising porridge.  Apparently some birds will eat it directly out of a bowl…. but not Bezukhov.  Naturally.  So, out came the syringe…  Unfortunately I am still not very good with administering medication by syringe/dropper.  A big lump of porridge landed on his beak.  Another on his head.  Despite being ill & weak, he could still wriggle.

That night both he & Cagney retired to the manor quite late.

The next day, Sunday 28th, the main aim was for Bezukhov to eat.  He ate some seed in the morning.  He was still obsessed with cucumber.  When he ate some cucumber I offered some seed & he usually had a few at that point.  He also ate a little fennel.  He preferred to be out of the manor but slept most of the day.  I weighed him again but the scales were a bit flaky, returning a value between 37-40g.  Had he lost more weight or stabilised?

END_OF_DOCUMENT_TOKEN_TO_BE_REPLACED

4 Comments Posted by onesweetiepea on 9 September 2013

Continuing in the VeGducating Thomas series, I am happy to report that Thomas is also partial to cucumber.  I think it was a welcome vegetable during the recent hot weather we have had – nice & cool & fresh.

Thomas did have some help from Phineas, as you can see from these photos…. 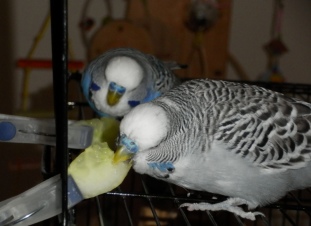 2 Comments Posted by onesweetiepea on 7 September 2012

Cagney has injured his foot again.

I noticed, as he has been holding it up quite a bit.  It is not as bad as the last time as he does not appear to be limping, at least his limp is very, very slight.  Unfortunately, like last time, he has developed a pressure sore on his good foot from having to rest his dodgy foot more.

Shortly after I took the photo below of his sore, I managed to discreetly dab a bit of savlon on via a cotton bud, through the landing platform, whilst he was distracted by the tasty cucumber.  I am not sure it will have done much good as he then toddled off & the cream was then smeared over the perches…

Today he has been holding his dodgy foot up but curled up & tucked into his feathers so I am hoping it is already on the mend.

6 Comments Posted by onesweetiepea on 3 April 2012

Chomping on a cucumber

The toyboys are still fans of cucumber & like to nibble the middle part.  Here are some photos of a recent nibbling session:

You are mistaken Bezukhov, this piece is mine.

I arrest you Sir, for being drunk & in charge of a cucumber!

In the second photo, it is also possible to see Bezukhov’s mysterious black blob.  Yes, it lingers still…

The middle is best

6 Comments Posted by onesweetiepea on 6 January 2012

The toyboys are still fans of cucumber, particularly Bezukhov.  They both start eating it from the inside out.  They nibble away until all the middle has gone….

3 Comments Posted by onesweetiepea on 12 September 2011

Cucumber is still a favourite here.

Initially, Bezukhov was the one who ate most of it but now Cagney eats just as much. Raspy will have a dainty nibble & Atilla occasionally has an aggressive chomp.

The middle is definitely the favourite part for the boys.