4 Comments Posted by onesweetiepea on 26 July 2014

Last night there was a disturbance.  Unusually, it was Bezukhov who started it, though what ‘it’ was, I am still unclear about.

It was late, around 11pm.  They were all covered: Cagney & Bezukhov in the manor & Phineas in the Ferplast.  The earlier bedtime routine had been uneventful.  All seemed well.  I was relaxing, watching the television (on mute, of course).  Suddenly there was a flapping, a disturbance.  I hurriedly turned the lamp on & investigated.

When I peered into the manor, I could see Bezukhov on the lower perch, panting & with his wings open.  Had he had a night fright?  Had he fallen asleep & somehow lost his grip & toppled off his perch?  Who knows?  My immediate task was to calm him down & get him back next to his mate Cagney.  I opened the main front door of the manor & put my finger there for him to step up.  He did not move.  I talked gently to him, blinking slowly to calm him down.  Cagney was still in his bedtime spot but wide-eyed & looking down at Bezukhov.  Cagney soon relaxed but it took longer for Bezukhov to move.

Finally, he stepped onto my finger & as I moved him up to the loft area, inexplicably, Cagney panicked.  Why, I do not know.  He flapped about & found his way out the manor door, whilst Bezukhov, in the chaos, landed back down on a low perch.

Cagney flew about the room & landed on the playgym.  Moments after, Bezukhov joined him.  So, it was past 11pm & now the toyboys were both sat on the playgym, seemingly not wanting to be in their cage.

At this point I checked on Phineas.  He had dismounted the ttmss swing that he had been asleep on & was now on another perch, looking confused.  I uncovered him a bit so he could see what was going on.  I also uncovered the manor to put it in pre-bedtime state in hope it would appear more enticing to the toyboys.

After Cagney & Bezukhov recovered, with a bit of shaking of feathers & preening, they flew to the plant pot stand & then onto the Ferplast to talk to Phineas.  All seemed fine.  Neither toyboy appeared to have any injury from the unplanned flapping about.

They all seemed quite lively at this point, Cagney & Bezukhov even doing a lap of the room.  I might add that it is still very hot here, even at night, so I was surprised they wanted to be so active.  I thought I would let them get it out of their system before attempting to get them to bed (again).  After a while I could see Cagney’s eyes closing & it was not long before they both willingly stepped up & were transported back inside the manor.

2 Comments Posted by onesweetiepea on 12 November 2012

It is possible that the presence of Phineas has upset the toyboys’ bedtime routine.  The other night they did not go to bed until half past midnight!  And that was only because I prompted them. 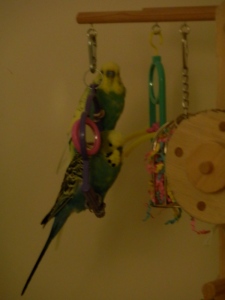 We’re not ready for bed yet…

For some strange reason, during the evening, they kept dozing somewhere other than the Manor.  This made it impossible to close them up at normal bedtime.  Normally if I approach them outside the cage nearing bedtime they would take the hint & start stretching wings & then retire to bed, perhaps having some more seed before the cover goes over.

This particular time they both settled on the swings on the playgym.  By “settled”, I mean head-under-wing-fast-asleep settled.  My little hints & prompts were making no difference to them.  Finally, at 00:30, I decided enough was enough & they would have to go to bed as I was tired & I wanted to go to bed myself!

But still no movement.

This called for drastic measures.  Bezukhov was on the nearest swing.  I very carefully unhooked the swing from the playgym & transported him, still on the swing, across the room, over the spare cage (with a sleeping Phineas) & into the Manor where he stepped up & I placed him on the bedtime perch.

Cagney was on the swing that was behind Bezukhov’s swing.  He was sleepy but had noticed his mate had gone back to the Manor.  With a little persuasion I got him to step up & I transported him across the room, over the spare cage & into the Manor, where he joined Bezukhov.  I covered them up & wished them sweet dreams & then retired to bed myself….