A change is as good as a rest

3 Comments Posted by onesweetiepea on 16 September 2014

Phineas is still very much into doing the hand jive.  He will jiggy-jiggy at least once a day & would most probably be happy fitting more sessions in if he could.  I had previously posted that he was right-handed/winged/clawed so the majority of his jiggling takes place on my right hand & the left hand is only used in emergencies.

So, Phineas is very much a creature of habit.  However, in the last few weeks he has been experimenting!  He still favours my right hand but he sometimes attempts to change position.

The new position entails rubbing his bottom along the outside of my little finger.  It feels very strange to me so it must have a great novelty factor for Phinny!  In this position, his feet flounder a bit as they naturally gravitate to my palm, so their positions can vary.  Sometimes, he starts off in the normal position, then moves to the little finger position & if he cannot get purchase quick enough, will revert to the normal position to ‘finish the job’.

However, there have been a few occasions when he has managed to complete the job in the new position.  To prove this, I present a photo of evidence, showing his deposit left on my little finger.  In the normal position it is left on the side of my ring finger.

BTW, who knew, when I started this blog, that I would be writing about these kind of things!  Thanks a bunch, Phineas!

5 Comments Posted by onesweetiepea on 23 February 2013

As Phineas has got over his moult, his “urges” have returned.  I am in a privileged position in that Phinny likes to jiggy-jiggy with my hand.  Privileged because he chooses me but also privileged as it means I can monitor his “deposits”. 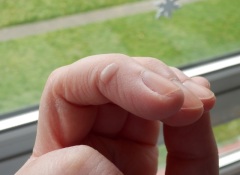 For the curious amongst you, here is what a budgie “deposit” looks like.

These have been fine for some time but in recent weeks I have noticed a varying amount of blood in them.  Sometimes it is a tiny amount, barely visible & other times it looks almost all red.  It has been a bit concerning even though Phineas has been fine in every other way.

So, a vet trip was on the cards.  This happened two days ago when I took him to the exotic vet.

Mr EV examined him & confirmed there were no suspicious lumps or bumps in that area.  He said there was a very, very slight inflammation, most probably due to “over-activity”.  He asked lots of questions about his general well-being & I got the impression that the blood in semen requires other symptoms to be regarded as a potential problem.  There are apparently options such as sterilisation (:0) & hormone injections (:0) but Mr EV felt these were not applicable in this instance.

I felt some relief after the visit, particularly as there were no lumps.  Budgies are so susceptible to tumours & growths that confirmation there was nothing wrong in that area was welcome. 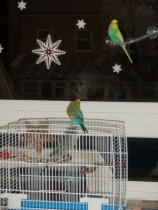 Phineas was a good boy throughout the ordeal.  I could not help but compare his stay in the travel cage with that of the puddings.  The girls were always very put out & found it totally unacceptable.  After the initial surprise, Phineas seemed far more adaptable & accommodating of “his lot”.  He even preened in the car on the way to the vet.  Of course his return was very noisy, with him & the toyboys shouting out.  I popped the travel cage on the coffee table whilst I let the toyboys out & they immediately flew over to him, no doubt to hear what adventure he had been on.

Strangely, Phineas could not for the life of him find the open door of the travel cage!  Rather than grab him again, I unclipped the cage & moved it on its side so he could exit from the bottom.  Silly boy!

He has since had a good talking to & I have told him to “tie a knot in it”.  However, I fear he was not listening to me….